On the sunny side of innovation

Engineering from Reutlingen
Schiller Automation: On the sunny side of innovation

Reinventing oneself again and again – that’s the recipe of SCHILLER AUTOMATION, a mechanical engineering company from the Swabian Alb. In the past, production was carried out for solar cell manufacturers or the producers of CDs. Today, however, industries have changed and today’s customers are such as car suppliers or medical technology companies.

An employee from SCHILLER works on an automation system (photo).

Reutlingen - In the Swabian Alb it is usually a bit colder than in the city of Reutlingen close by. Just alike, SCHILLER AUTOMATION GmbH from the Swabian Alb village Genkingen has been exposed to quite a few rough winds in history.
That is probably why the managing partner Stefan Schiller says today: “We work for diverse industries. That is important.” - and with this statement, he makes a difference from earlier days.

Today, automotive suppliers are the company's most important customers. Machines and systems for automation technology are manufactured for these. For example, for the production of sensors that measure distances. "Sensors are also needed for autonomous driving," says Schiller, "regardless of whether it is a car with an electric drive or an internal combustion engine."

The machines and plants from the Swabian Alb assemble, weld, glue, screw - and they can also assemble a complete battery from individual battery cells. The company is not only involved in the trend towards electromobility, but also when solar or wind energy is to be stored.

With automation systems for the production of LED lighting, the company sees itself in another growth market. "Automation is the only way for industry to produce large series cost-efficiently," says Schiller. His company delivers systems for others and furthermore assembles individual parts for customers as a contract manufacturer.

After a customer’s visit, the 160 employees often face new challenges. For example, we have a request from a car supplier or a customer from the medical technology sector which has developed a new device or a new sensor and wants to bring it on the market. And then we’re asked if we can build a machine for it.” Says managing partner Stefan Schiller. “with us there is almost never anything off the peg.”

It is similar with customers from the lighting and laser technology, for example for the production of systems for the manufacturing of LEDs or for automation systems for the production of batteries. A first order from a medical technology company is currently being processed. The most important market for SCHILLER is Europe, but they also do exports to the USA or China.

Depending on the respective orders, the export share is between 30 and 50 percent of sales. Of course, SCHILLER also sees the global economic risks, but the protectionist aspirations of, for example, US President Donald Trump hardly scare him: “The American industry must also automate if it wants to remain competitive.”

But although the company sells its machines and systems around the world, a certain amount of down-to-earthness is important in Sonnenbühl. For Stefan Schiller, this is also evident in the way he deals with employees, for whom there are various options for flexibility in terms of time, depending on their phase of life. The employees come from the Swabian Alb, but also from the cities of Reutlingen and Tübingen: “The employees who drive up to us are not stuck in traffic, like employees who have to drive down to companies in Reutlingen in the morning”, says Schiller. He cannot complain about a shortage of specialists, but there are vacancies in the IT. Sometimes, problems can arise when someone is supposed to go abroad for a long time: “Among employees, the desire to travel is no longer regarded as great as it used to be. Today you can go anywhere with a cheap flight”.

Customers are more diverse today than they used to be

In the past, the circle of customers was not as diverse as it is today – it was the case twice that the company had to search almost completely for new markets. Ten years ago, Sonnenbühl was on the sunny side - with systems for the production of solar cells. These generated three quarters of sales - but then the market collapsed. However, this was not the first setback. Even before the year 2000, SCHILLER AUTOMATION was supposed to be in a growth market - with machines for the production of CDs, DVDs or displays. However, this business declined due to falling demand for CDs and was given up in 2013.

But now the sun is obviously smiling again at the automation specialist from Sonnenbühl. "We are stable and solid on track," says Schiller. Sales are expected to increase from 24 million euros to more than 30 million euros this year. The company, founded by Sieghard Schiller in a garage in Sonnenbühl-Genkingen in 1978, was not only turned upside down twice - it is also an example of the structural change in the region: After an interlude in Reutlingen, the company founder was able to buy the building of the former knitting company “Drei Kirschen” (“three cherries”) in 1985. There is little left of the textile industry in the Swabian Alb - instead, it’s automation technology that creates jobs, now. 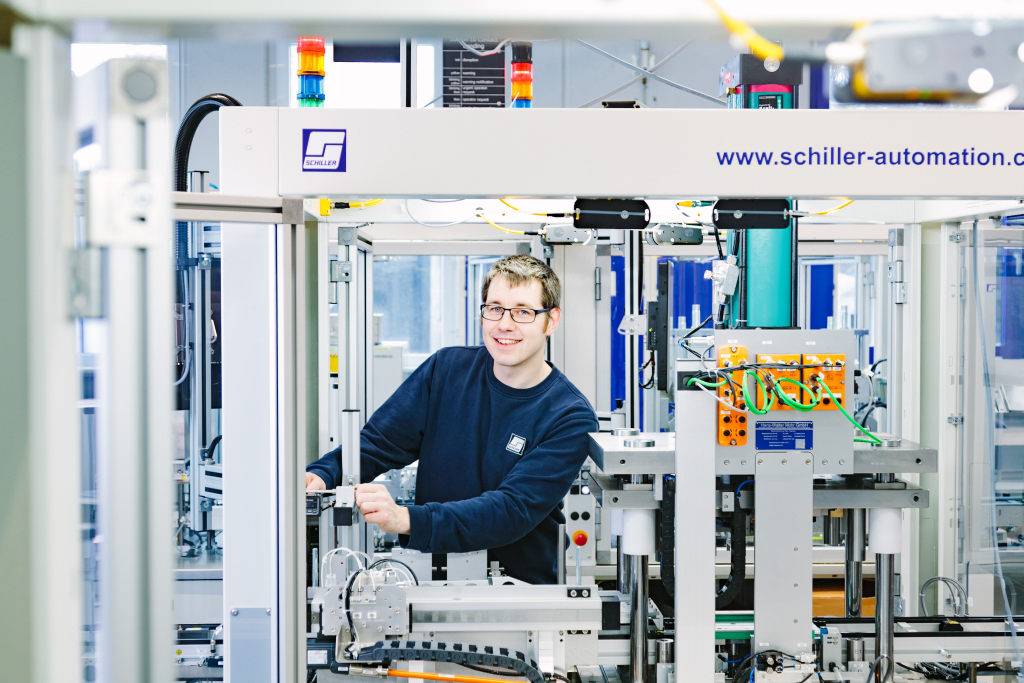 DO YOU HAVE ANY QUESTIONS?

Disclaimer:
Despite careful content control, we assume no liability for the content of external links. The content of the linked pages are the sole responsibility of their operators.

Responsible body in the sense of the data protection laws is: Stefan Schiller

For the provision of paid services, we request additional data, such as: Payment details.

To protect the security of your data during transmission, we use state-of-the-art encryption techniques (such as SSL) over HTTPS.

If you contact us by e-mail or contact form, the information you provide will be stored for the purpose of processing the request and for possible follow-up questions.

Deletion or blocking of data

We adhere to the principles of data avoidance and data economy. Therefore, we only store your personal data for as long as is necessary to achieve the purposes stated here or as provided for by the various storage periods provided for by law. After discontinuation of the respective purpose or expiration of these deadlines, the corresponding data are routinely and according to the legal regulations blocked or deleted..

In order to render our content correctly and visually appealing across browsers, we use script libraries and font libraries on this website. For example, Google Webfonts (https://www.google.com/webfonts/). Google web fonts are transferred to the cache of your browser to prevent multiple loading. If the browser does not support Google Web fonts or prohibits access, content will be displayed in a standard font.

The call of script libraries or font libraries automatically triggers a connection to the operator of the library. It is theoretically possible - but currently also unclear whether and if so for what purposes - that operators of such libraries collect data.

Use of Adobe Typekit

We use Adobe Typekit for the visual design of our website. Typekit is a service of Adobe Systems Software Ireland Ltd. which grants us access to a font library. To incorporate the fonts we use, your browser needs to connect to an Adobe server in the US and download the font we need for our website. Adobe receives the information that your website has been called from your IP address. For more information about Adobe Typekit, see the Adobe privacy policy, which can be found here: https://www.adobe.com/de/privacy.html

Use of Google Maps

This website uses Google Maps API to visually display geographic information. When using Google Maps, Google also collects, processes and uses data about the use of map features by visitors. For more information about Google's data processing, please refer to the Google Privacy Notice. There you can also change your personal privacy settings in the privacy center.

Find out more about detailed instructions on how to manage your own data related to Google products.

Your rights to information, correction, suspension, cancellation and opposition

For a data lock to be taken into account at all times, these data must be stored in a lock file for control purposes. You can also request the deletion of the data, as long as there is no legal archiving obligation. As far as such an obligation exists, we lock your data on request.

You can make changes or revoke your consent by notifying us with effect for the future.

Questions to the data protection officer

This privacy statement was created with the help of Datenschutzerklärungs-Generator of activeMind AG.